HOW DOES BEE VENOM LOOK? 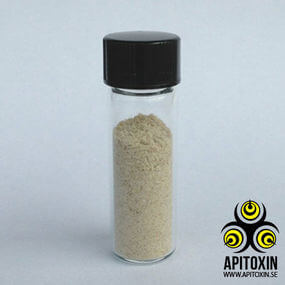 Honey bee venom is a colorless liquid. After drying, it is a powder-like material like as in the picture above. There are three different kinds of venom, pure whole dried, whole dried, and freeze-dried (lyophilized) bee venom.

1.) Pure whole dried bee venom is the purest venom. It is white (often snow-white), not contaminated with foreign materials, and colorless when used in a solution.

2.) Whole dried bee venom may be contaminated with pollen, feces, dust, nectar, or honey. Its color varies from yellow to brownish-yellow which depending on the oxidation of the components. In solution form, it also has the same color.

3.) Freeze-dried bee venom is highly processed and purified venom. During the preparation, its moisture content and any other contaminants are removed in order to purify and preserve it. Some of the active components may also be removed if an uncontrolled purification method is used. It is widely used in creams, liniments, and ointments. In a tablet form, it can be used to prepare a venom solution for electrophoresis or ultrasonophoresis applications. It is easy to sterilize with syringe filtration.

If bee venom is protected from moisture and light, it can be stored for five years or more. It will not lose its toxicity; however, its healing effects are reduced by storage. Freeze-drying is perhaps the most effective method of preserving bee venom.
Copyright © 2012, Apitoxin - www.apitoxin.se - All rights reserved